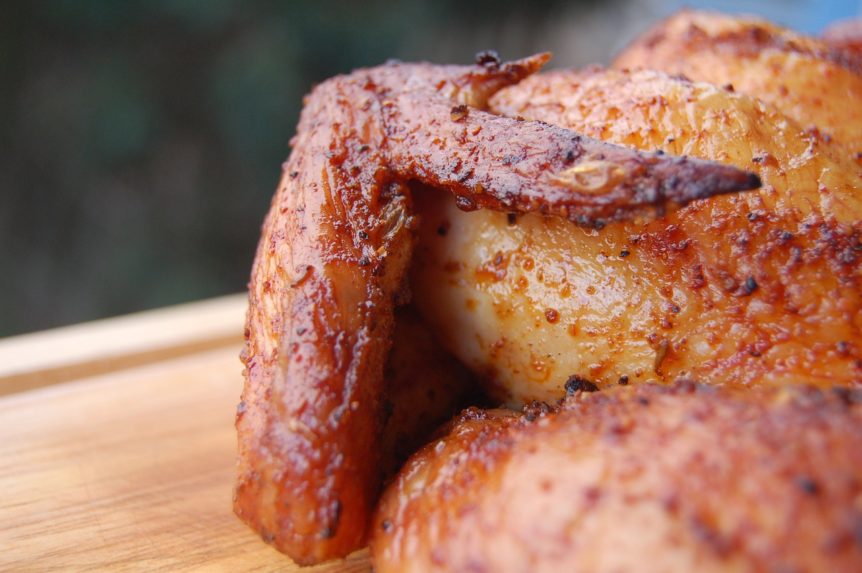 The Portuguese call it Frango à Piri-Piri. Portuguese Piri Piri chicken is a spicy dish with roots in both Africa and Portugal. It has its origin in the era of discoveries when the Portuguese who went to Angola and Mozambique, brought back chile peppers enchanted by its flavour. In Swahili, the peppers were known as Piri-Piri and used to add “fire” to the food. Portuguese added garlic and the squeeze of lemon.

The sauce they create and combined with the typical grilled chicken became one of the simplest, usual and delicious delicacies of Portuguese cuisine. Also, the dish enjoys lots of fame in Anglo-Saxon countries.

The Portuguese Piri Piri chicken recipe is popular in the UK by a restaurant chain based in Johannesburg called Nando’s. The owners tried the recipe in 1987 at a Portuguese restaurant in Rosettenville. They knew they have tasted something that had to be shared. This is the reason why they opened the restaurant that has expanded in the UK and other countries and preserves the original Piri-Piri essence.

Timing note: Charcoal grilling takes its time. You need a charcoal grill to cook this recipe. Any other recipe that requires oven roasting, frying the peppers or braising the chicken won’t taste the same. Also, it’s a recipe that needs its time to marinate properly and for the flames and charcoal smell penetrate the skin. If you are looking for a 20-30 minutes recipe, this one is not for you. It would be worthy if you take the time to cook it.

For the Piri Piri marinade:

Note: Portuguese Piri Piri chicken recipe is all the rage at the moment. You can add more chillies to make this exquisite, moist chicken even hotter. If you don’t feel like preparing all the chicken you can use breasts and skinless chicken thighs instead.

Get exclusive offers!
Join our Newsletter to receive the latest recipes, discounts and BBQ tips.
Give it a try, you can unsubscribe anytime.

Grilling on a charcoal grill

Charcoal grills are a bit of know-how required. It’s all a process from lighting the coals to cleaning when you finish cooking. It usually takes more time than gas models. However, they fill the food with that perfect smokey flavour that gets is well worth it. Whether if you are cooking the tenderest juicy meat or delicious Portuguese grilled sardines, coal and wood add up an incredible aroma to the environment.

Looking for a charcoal grill? In our store, we have the best ones, from budget-friendly to the top greatest from the best brands in the market. We have Weber, Broil King, Napoleon charcoal grills and many more. Check our store!

Contact us or visit our store in Algarve for expert advice.

Get exclusive offers!
Join our Newsletter to receive the latest recipes, discounts and BBQ tips.
Give it a try, you can unsubscribe anytime.
X
× WhatsApp Us