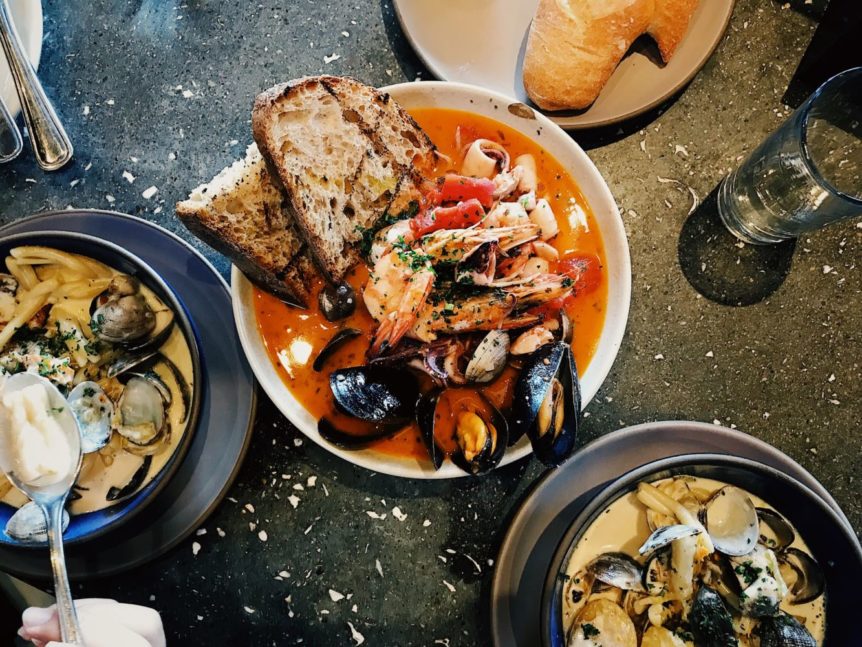 Portugal and Spain share lots of traditions, especially in the culinary field. We receive many clients from our neighbouring country who are interested in buying our amazing barbecues. To honour our beloved Spanish customers, today we are talking about Spanish food and the best Spanish dishes to cook on the grill😍 .

If you have travelled to any city in Spain you may have tasted Spanish tapas. In fact, if there is a gastronomic activity that Spaniards love, it is “tapear”. Keep reading to know everything you need to know about this tradition!

📌 Tapas is a derivation of the verb “tapar” which means to cover. According to the Royal Spanish Academy, a tapa is -in its eighth meaning- a small portion of some food that is served as an accompaniment to a drink.

Establishing the origin of the tapa in Spanish culinary history is complicated, as its concept has changed a lot over time.

It is often argued that its etymological origin comes from the ancient custom of taverns of covering glasses with a piece of bread or a slice of ham, to prevent dirt and flies from entering the interior.

Whether at home or away from home, tapas is synonymous with informality and time with friends, which makes us understand, ipso facto, the reason for its success 👏.

Spanish dishes to cook on the grill

Spanish tapas recipes make ideal barbecue food appetizers. You can cook many of them on your grill in under 15 minutes and they are all perfect for the outdoor grill.

Get exclusive offers!
Join our Newsletter to receive the latest recipes, discounts and BBQ tips.
Give it a try, you can unsubscribe anytime.

If barbecue food means it’s all about eating with your fingers, you will love the following Spanish dishes to cook on your outdoor kitchen.

You should note unlike “American Barbecue” that focuses heavily on sauces, marinades, slow-cooking the meat, and smoking, the Iberian barbecue is all about fresh flavours and prime-quality ingredients.

The Spanish dishes that grace the outdoor kitchens of Spain are so many! It is difficult to choose exactly the best ones. Take notice you can cook wood-fired paella, sardines or perfectly grilled pork chops (Spain is well-known as the land of pork). However, we have chosen the easiest tapas to grill.

👩‍🍳 Good food is not an exception, nor a rule; it is an integral part of life in Spanish cuisine.

Try the following Spanish dishes to cook on the grill and we promise that the air of your outdoor dining area will be filled with the smell of the more tempting aroma of freshly cooked ingredients and perfect foods combinations.

Pan con tomate or bread with tomato is one of the most known Spanish tapas. It is often served to eat with the best quality Iberian ham, vital in most Spanish homes.

Would you dare to grill your bread and serve it as a starter on your next barbecue party in Algarve? We are sure with a little trial and error, you will be able to quite successfully toast (and even bake) bread in your outdoor barbecue grill.

First, heat your grill to medium-high. Generously brush bread slices with extra-virgin olive oil and place oil side down on the grill.

Grill for 2-3 minutes, until golden, watching closely and moving around as necessary to adjust for heat. Turnover and grill the other side continuing to watch closely.

🍅 Rub the toasts with garlic cloves, then rub with tomato halves until all of the flesh is gone. You can also season the toasts with salt and pepper and top with your favourite cheese.

Many Spaniards previously grate the tomato and bathe the bread with its juice instead of rubbing it.

#BBQTip Take your time to toast the bread, this way, it will attain that gloriously, perfectly golden brown crispiness you dream of when you’re thinking of the perfect toast.

This is a satisfying and easy way to serve bread. It’s so simple that you’ll be amazed at how good it tastes!

For a variation, try using an infused olive oil such as garlic or rosemary.

Tiny green peppers, also known as Pimientos del Padrón are also very popular in Spain. They are one of the favourite dishes for both Spanish and tourists alike. These fried peppers are also vegan friendly🌱!

#BBQTip Look for peppers or chiles with tight, smooth skins. They should also feel heavy for their size, which indicates that they are both ripe and fresh.

First, rinse the peppers under cold water and dry thoroughly.

Then place a large nonstick skillet or a frying pan with olive oil on the side burner of your grill.

When the oil is hot, add the peppers and cook over moderate heat, stirring often, until slightly charred and just softened. This should take about 4 minutes. Fry the peppers in batches and drain on paper towels.

Choose the perfect side burner!

Remove from the heat and season with coarse salt, transfer to a plate and serve warm!

Have a gas flame or hot grill? You may also want to use the direct cooking method to broil the peppers instead of frying them. This method works for peppers and chiles of any colour!

Follow the steps for a new version of gazpacho using grilled vegetables!

Grill the vegetables over moderately high heat, turning frequently, until lightly charred and crisp-tender. This should take about 10 minutes.

Then, transfer the peppers to a bowl, cover with plastic and let steam for 10 minutes.

📃 Meanwhile, remove the garlic cloves from the skewers, peel them and transfer to a large bowl. Using a large serrated knife, cut the charred corn kernels into the bowl. Peel the peppers and add them to the bowl along with the zucchini, the onion, a little bit of cumin, 2 cups of tomato juice, 1/2 cup of fresh orange juice, 3 tablespoons of fresh lemon juice and 2 tablespoons of red wine vinegar.

Working in batches, puree the vegetable mixture in a blender or a food processor. Pour the gazpacho into a clean bowl and season with salt and pepper to your taste. Cover and refrigerate until chilled, about 2 hours.

Just before serving, stir 1/4 cup of chopped cilantro into the gazpacho. Ladle the soup into bowls, garnish with 1 English cucumber, thinly sliced and serve.

🍅🍅 Gazpacho is served cold and we promise you will love the smoky flavour from previously grilling your veggies.

Mussels, also known as mejillones are another Spanish tapa, especially in the coastal regions of the country.

Though us Brits might be more used to creamy and white moules mariniere dish, Spanish has the tradition of serving mussels in a tomato-based sauce called “mejillones a la marinera”.

These are the ingredients you need to prepare this dish:

Heat a dash of oil in a large casserole, stewpan or wok. Add the mussels, close the lid of the pan, and steam the mussels on high heat until open and done (depending on the pan and the power of the heat source this should take somewhere between 5-8 minutes).

Remove the mussels as soon as they are opened even if they are not completely cooked so that they are not dry. Reserve.

🍴 Cut the onions into brunoise and garlic and sauté in a frying pan. Combine with the flour and sauté.

Add the tomato sauce, paprika, parsley and white wine and stir it a few times so that the white wine evaporates a little.

Lastly, add the broth from the strained mussels and let it reduce a little.

Remove the sauce from the heat and put the mussels in for a minute so they take on the flavour.

Serve them on a platter and eat hot🔥 .

To finish this list of incredible Spanish dishes you can cook on the grill, we want to propose Catalan escalivada, a traditional starter from the Catalonia region. You can serve it as a salad or as a side dish with your juicy steaks.

Escalivada is a very versatile dish. You can also serve it heaped on a hamburger bun, or as a topping for grilled pizza.

Spaniards usually cook escalivada over charcoal or wood fire. Otherwise, follow our guide on how to smoke on a gas grill to get that smoked flavour into the veggies.

First, pierce 1 eggplant, 1 large red bell pepper, 1 onion and 1 large tomato with a sharp knife in 3 or 4 places (to prevent steam from building up inside the skin). Then, slice the top off one small head of garlic.

Take notice the tomato may soften before the other vegetables are ready. If this happens you should remove it. Then remove all your charred veggies to a bowl. Let them sit until cool enough to handle.

Peel the eggplant. Chop or shred the flesh and place in a bowl. Peel and cut the pepper in strips and add to the eggplant. Do the same with the onion and cut it in lengthwise slivers. Peel the tomato, discard seeds and chop the flesh. Combine the vegetables and season them with salt and pepper.

To finish adding more flavour, squeeze the softened cloves of garlic out of the skins into a small bowl. Mash them with a fork. Stir a teaspoon of vinegar and olive oil to your taste into the garlic paste, then stir it into the vegetables.

Loved these Spanish dishes recipes to cook on the grill? Would you add any other? Let us know in the comments below! Share your results with us on Instagram and inspire yourself with all the grilling tips we publish for you!

Looking for the best barbecues to build your outdoor kitchen? Check our shop or visit our store in Almancil. We will guide you and look for the best option for you. Enhance your grilling experience with top BBQ products that will last for years to come!

Get exclusive offers!
Join our Newsletter to receive the latest recipes, discounts and BBQ tips.
Give it a try, you can unsubscribe anytime.
X
× WhatsApp Us
We use cookies to ensure that we give you the best experience on our website. If you continue to use this site we will assume that you are happy with it.OkPrivacy policy