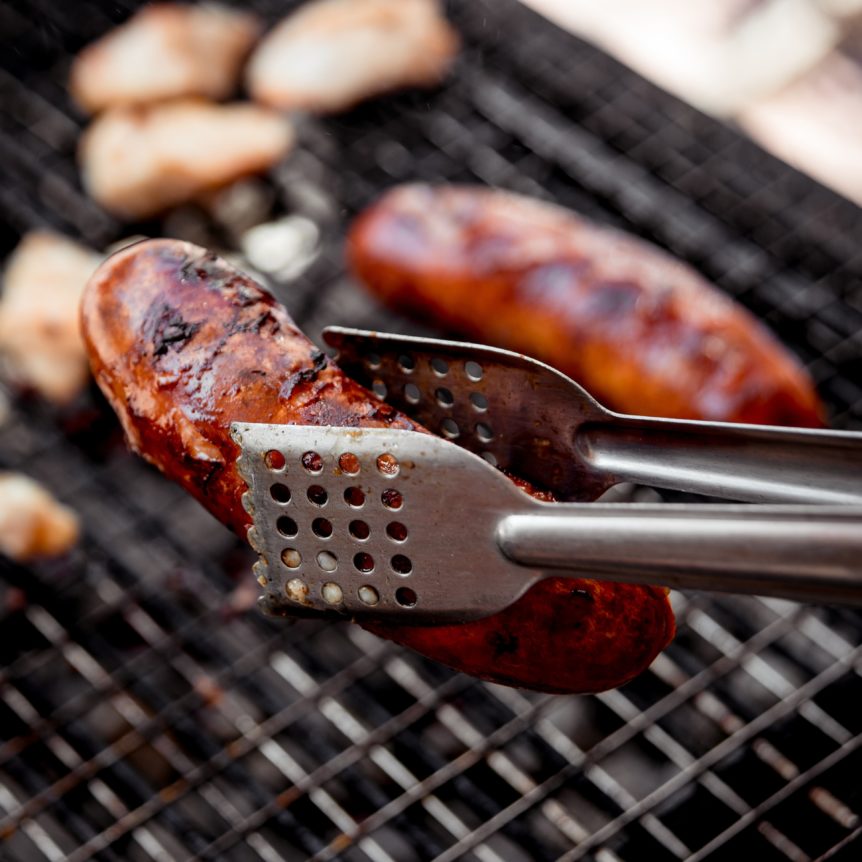 When you think of sausages, barbecuing them is usually the first thing that comes to mind. They are so delicious in this traditional way. In this sense, Bangers and Mash is the familiar term for Sausage and Mash, a favourite British and Irish dish. Bangers and Mash are quick and easy to make, and also makes a cheap yet very substantial meal. According to our friends from Napoleon Grills, Germans have their own version of this British dish and cook it on National Bratwurst Day during Summer.

As British, we love our traditions, but also love its variations and the fact our traditional dishes can inspire other cultures. This is the reason why today we will present you how to cook Bratwurst Dinner in a recipe created by Andrea Alden. Easily made in one place, on a Rogue Gas Grill, these brats are cooked down in German beer, then the beer to make gravy with added caramelized onions. Bratwurst with Beer & Onion Gravy is a deliciously German variation on our traditionally British dish.

For the caramelized onions

For the beer & onion gravy

The world is a better place with bangers and mash

The name bangers ais believed to come from the habit of sausages bursting in the pan with a bang if cooked too quickly. It has been declared that the term bangers and mash has its origins in World War II when the sausages were of such low quality that when they were cooked they partially exploded, but it has been used since at least 1919.

As we mentioned before, it’s one of the UK’s most iconic dishes and it’s featured front-and-centre on our menu. This rich meal, mainly consisting of mashed boiled potatoes, sausages, and gravy has been filling bellies in the British Isles for a surprisingly short period of time.

On the other hand, bangers are the quintessential British breakfast sausage, forever immortalised by being half of the classic ‘Bangers & Mash”. Bangers are not just one kind of sausage, the term can refer to any British sausage and you will a variety of British sausages in the English breakfast depending on what part of the country you are in. We would also love to add that this dish is a great favourite with children.

Moreover, the sausages may be pork, beef, or lamb, but one of the most traditional meat sticks is Cumberland sausage, a coiled pork sausage from northwestern England.

Tips to cook bangers and mash and Bratwurst dinner

It is easier to regulate the heat on a gas grill. We love a gas grill for everything, really. If you’re a charcoal purist, feel free to discount this advice, but a constant, regulated heat source leads to a better final product and once you bring your coals down to sausage grilling temp (300-350°), the temperature may drop even lower and get the job done. Gas fixes that problem.

Should you fancy learning how to cook more recipes on your gas grill visit our recipes. You will learn to grill juicy steaks, veggies, beef brisket and Portuguese sardines! Sounds yummy? We’d be happy to see that you’ve tried our recipe! Share your results on Instagram and tag us @bbqsalgarve!

Get exclusive offers!
Join our Newsletter to receive the latest recipes, discounts and BBQ tips.
Give it a try, you can unsubscribe anytime.
X
× WhatsApp Us
We use cookies to ensure that we give you the best experience on our website. If you continue to use this site we will assume that you are happy with it.OkPrivacy policy